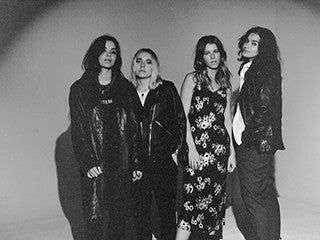 There are at least other six different artists called The Aces. 1. The Aces are an all-girl band originating from Provo, Utah. The band formed over a decade ago when sisters Cristal Ramirez (vocals, guitar) and Alisa Ramirez (drums) recruited their childhood best friends McKenna Petty (bass) and Katie Henderson (guitar, backup vocals). They began performing as The Blue Aces at various local venues. Being from a conservative hometown allowed them to play at most venues in their town as alcohol was prohibited in these venues. They wrote many original songs attempting to follow other alternative rock bands but ultimately they were able to find their own alternative pop sound. They shortened their name to The Aces and independently released their first hit single "Stuck" in May of 2016. The band signed with Red Bull Records at the end of that year. In mid 2017 they released their first EP "I Don't Like Being Honest". Their debut full length album, "When My Heart Felt Volcanic", was released on April 6th, 2018 through Red Bull Records. Their second full length album "Under My Influence" was originally supposed to be released on June 12th, 2020. However, on June 7, the band announced that the album would be delayed in response to the George Floyd protests. The band eventually released the album on July 17, 2020.2. The Aces was one of the earliest and most influential of the electric Chicago blues band in the 1950s. Led by guitarist brothers Louis Myers and Dave Myers, natives of Byhalia, Mississippi, the brothers originally performed under the name "the Little Boys"; with the subsequent addition of harpist Junior Wells, they rechristened themselves the Three Deuces, followed by the Three Aces. The 1950 enlistment of drummer Fred Below prompted another name change, this time to the Four Aces; finally, to simplify matters once and for all, the group performed as just The Aces. Influenced in large part by jazz, they developed an urbane, sophisticated style well ahead of its time; in particular, Below's refined rhythms led to the rise of the blues shuffle beat, and helped launch the drums to a new prominence within the blues band.In 1952, Wells quit to join the Muddy Waters band, filling the vacancy created by the recent departure of harpist Little Walter; ironically, Walter himself quickly signed the remaining Aces as his new backing unit, renaming the trio first as Little Walter and the Nightcats and then the Jukes to capitalize on his current hit single "Juke". A series of seminal recordings followed -- "Mean Old World", "Sad Hours", "Off the Wall", and "Tell Me Mama" among them -- before Louis' 1954 exit resulted in the Jukes' gradual dissolution as Little Walter's band, but freeing up the members to reform as a backing band for other Chicago blues artists such as Otis Rush and others.In the late 1950s Dave Myers switched from guitar to the electric bass, becoming one of the first Chicago bluesmen to adopt this relatively new instrument, and helping to popularize it in Chicago blues. During the 1960s, 1970s, and 1980s the original Aces reunited on numerous occasions for recordings, tours, and festival gigs.3. London based Mod group. Recorded - One way street, single.Charlie Casey (Bass) Steve Tannett (Guitar) Noel Martin (Drums).After "Menace" split up at the end of 1978, the last remaining members start "The Aces". The title track is a brilliant song. They also had recorded another single as "Vermillion & The Aces" with an american girl on 4. The band comprise the imposing figure of Sky O’Banion on lead vocals and harmonica, Derek Irving (lead guitar and sitar) and Mike Gutsch (drums), with the rhythm guitar work shared on the ten tracks between Bob Welsh and Chris Anderson – together they create an intense wall of sound that grabs you from the start and doesn’t let go!Inspired by lo fi blues music, The Aces create a sound all their own using two guitars, harp/vocals and drums. Fronted by vocalist and harmonica player Sky O'Banion and guitarist Derek Irving, The Aces push the limits of their own musical creativity. Wailing harmonica, distorted vocals, hypnotic guitar lines, pounding rhythms and stream of consciousness lyrics take you on a musical journey where the sound will charge you. It’s probably the rawest, most energetic blues since the late, great Lester Butler and his band, The Red Devils, burst out of LA in the early 1990s’ – The Aces work on some of the same templates – blasting harmonica, down home guitar and the same driving rhythms, but with The Aces powered by low-tuned second guitar as opposed to a conventional bass player.5. A Reggae Band which were the best known for their work for reggae legend Desmond Dekker, but released recordings by themselves.