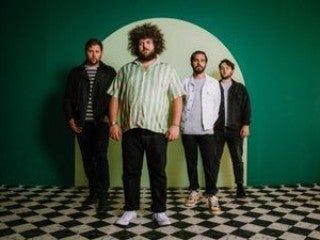 Ripe’s new album Bright Blues has an anthemic feel. It is a collection of 12 songs full of sleek grooves and bold melodies that the Alternative-Pop quartet put together to help ride out tough times.
The members of Ripe have never felt more assured about the band or their music. Collectively and personally, Ripe has weathered a mountain of adversity over the past few years, and from those struggles has arisen their best art yet. Bright Blues, Ripe’s sophomore album, is enjoying big excitement at radio, with the new single “Settling” hitting top 15 at AAA and top 25 at ALT with over 16K+ radio spins garnering 15+million impressions and being featured as Alt Nation’s critical cut artist.
“The wildest thing for me is that the record simultaneously sounds like it has the scars of everything we’ve been through and also that it doesn’t — it’s joyful music, which is very exciting given that it was made in the middle of getting hit in the stomach,” says singer Robbie Wulfsohn, who came together with guitarist Jon Becker, drummer Sampson Hellerman, and trombonist Calvin Barthel while they were all studying at Berklee College of Music.
Ripe is taking Bright Blues on the road, with a nationwide headline tour that begins shortly after the album’s March 10th, 2023 release date. The tour will hit prestigious venues such as MGM Music Hall at Fenway in Boston, Terminal 5 in New York City and The Fillmore in San Francisco.
Even before the pandemic, Ripe was on the cusp of something new. The band began drawing acclaim from the likes of the Boston Globe, Huffington Post and WXPN with a jam-ready funk vibe on EPs Produce The Juice and Hey Hello. Ripe built on that sound and folded in a touch of R&B on their first full-length, Joy in the Wild Unknown. Their streams on Spotify surged past 65 million, they conquered stages at festivals including Bonnaroo, Firefly, SweetWater and Bottlerock,and they sold thousands of tickets across the US, including sell outs at iconic venues like House of Blues Boston and Brooklyn Steel. Ripe was still ready to try a different approach for Bright Blues. The album would already be different in that it would be their first release after signing to indie powerhouse Glassnote Records. They started the creative process by calling in outside producer Paul Butler (St. Paul & the Broken Bones, Michael Kiwanuka) and for the first time, bringing in co-writers, recording four songs that Ripe released as singles throughout 2020.
“We thought, how can we do something new?” Hellerman says. “Something that still has our sound and vibe at its core, how can we expand our boundaries and reach more audiences while still staying true to what makes Ripe Ripe?"
The answer was teaming up with Noah Conrad (BTS, Niall Horan) and Ryan Linvill (Olivia Rodrigo, Dermot Kennedy), classmates from Berklee who are up-and-comers in the world of pop songwriting and production. Together, the band and its collaborators dialed in a buoyant sound on the hooky album opener “Get Over,” where synths help flesh out a throwback pop sound. Ripe works a hot soul vein on “All or Nothing,” where horns punctuate a snappy rhythm that powers smooth, fully self-assured vocals. Woozy synths on “Paper Cups” help create a dream-like vibe accentuated with a subtle, hypnotic melody.
Bringing new people into the fold, even though they’re old friends, was an exercise in trust that proved well worth it. “We used to just all get in a room and kind of hash it out,” Becker says. With Bright Blues, “It was only one or two of us at a time with Noah and Ryan, so our individual voices got to shine more.”
The new approach also helped Ripe think of the band’s high-energy, freewheeling stage show separately from the recording studio, which they used more as an instrument in the making of Bright Blues. Wulfsohn chimes in, “There are moments of improvisation on the record that feel like somebody was just going for it and hitting something really exciting. I’m biased, but I think you hear every distinct voice across the record, and I think the circumstances of the record absolutely leaked into the musical choices.”
The result is an album that shows the full scope of the band’s abilities as writers and performers. The live show has always been at the core of who Ripe is, and now the recorded music can stand alongside it as an all-encompassing representation of who the band is and where they are going.
Bright Blues also showed the members of Ripe that they can still surprise each other. “Each of us had moments while making this album that really resonated with us, if not broke us open emotionally,” Barthel says. “Having that experience coming from people who you know better than anybody else and trust so much is pretty mind blowing. It definitely left us all with a new level of inspiration and drive and belief in what we could all do.”