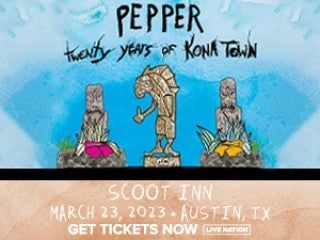 PEPPER, comprised of guitarist/vocalist Kaleo Wassman, bassist/vocalist Bret Bollinger and drummer Yesod Williams, formed in Kailua-Kona on the Big Island of Hawaii in 1997. Having grown up surfing on the island, it's not a wonder that they would mix their rock "shock and ah" flare, along with their mellow island rhythm roots to create their own truly diverse sound. They have also been known to hypnotize fans of all walks of life with their incredibly sweet harmonies all the while keeping bodies moving on the dance floor. The trio played mostly house parties and garages before finally shipping out to San Diego, CA in 1999 to push their first studio release Give'n It.