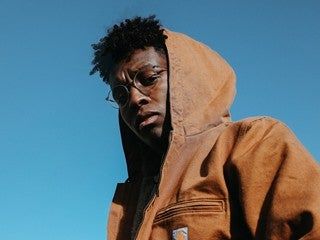 All support acts are subject to change without notice.

Daniel Gerard Breland , known professionally as Breland, is an American singer, songwriter and record producer of a hybrid of country-trap, R&B, and soul music. His debut single, "My Truck", gained popular attention via social media, reached No. 26 on Billboard's Hot Country Songs chart, and was remixed with Sam Hunt. "My Truck" was certified platinum for sales of 1,000,000 units as of January 2021.

Breland has released two EPs on Bad Realm Records/Atlantic Records, and his music been streamed on Spotify over 28 million times. He is scheduled to release his debut full-length album in 2021.

Raised between the coasts of CA and FL, Ashley Cooke is an up-and-coming country artist who is bringing authentic and honest storytelling to her music. The singer/songwriter developed her love of country music as Rascal Flatts, Jason Aldean and FGL quickly became the soundtrack of high school. Cooke followed her passion for music to Belmont University where she won the Country Showcase, placing her in an elite class of winners that includes Brad Paisley, Chris Young, Tyler Hubbard and more. “Sunday Morning Kinda Saturday Night,” the latest release from Cooke, is a mid-tempo song with a new take on a break-up as the POV looks for a little more ‘Sunday morning’ to balance out the wild Saturday nights. The single debuted at #1 on the iTunes Country chart and was quickly added to SiriusXM The Highway’s “On The Horizon” program and featured on iHeartRadio’s “Women of iHeartCountry.” Throughout 2020, Cooke continued gaining traction on TikTok where she has amassed 580K followers and 6M likes. Cooke noticed the void in Nashville for a content creation studio for rising country musicians and co-founded The 615 House. In Oct. 2020, Cooke released her poignant single, “Jealous of the Sky,” written about the pain of losing her best friend to cancer at age 18. She will be releasing new music in 2021 produced by reigning CMA ‘Song of the Year’ winner, Jimmy Robbins.